We've been busy since the last post with quite a few calls to go and pick stuff up.  The van is rarely empty what with collections and deliveries.  Donations have included some lovely vintage G-Plan furniture and a van load of top quality furniture, china, crystal and paintings from some very generous people.  Now we've got to work our way through it all to sell it on line - oh for a charity shop again!

Last weekend I was twice told that I was an answer to prayer - the first time by someone who was clearing a house and wanted it to go to a Christian charity, and the second time by some nice people from Havering Christian Fellowship who had bought something from us through eBay and it was just what they were after.  Turns out their church supports some similar projects to ours but in Nigeria.

Recently had a few finds that fall into the category of scavenging I suppose - but all for a good cause.  Spotted part of a lovingly presented stamp collection in the bottom of a skip and struggled home with several volumes of it.  Gave it to our stamp expert Gordon to deal with and it raised us a few pounds at auction and also gave the collection a new home.  It's always sad to see stuff that has obviously had much love and attention lavished on it just chucked away.  I also spotted some bags of clothes that had been cleared out of a neighbour's house.  Upon enquiry I was assured they were all pure rubbish - however curiosity got the better of me and a couple of nights later I crept out after dark and discovered a bag of lovely vintage clothing!  More has since followed (legitimately!) and it will all go on our stall at next summer's festivals. 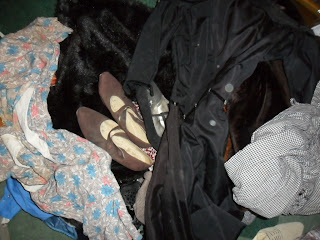 The derelict church where we store stuff has been suffering from a pigeon infestation which has got a bit out of hand of late.  David, a friendly helpful chap who has been buying bits of the church from us for a few years now for his house renovation project offered to climb up and fix the holes in return for some wood.  Great job done!  No longer are we greeted with cooing and flapping every time we go in to get something, and no longer do we have to cover everything up with sheets.  Just got to do a bit of a clear-up now...
David's mate James also climbed up and repaired the spire for us a couple of years ago in return for some radiators.  There's no health and safety around here.

Looks like we've got another stage appearance of our stuff coming up- someone came for a chair this morning and ended up buying a sideboard and table as well.  It's all appearing at the Jack Studio theatre in Brockley at a performance of Homework.  We've been promised some action photos so watch this space.

Thanks to all the fundraising that's been going on lately we were able to send off a further £2500 this week to pay for orphans' expenses, which is what it's all about.
Posted by Tatenda Trust at 09:43 No comments:

Tatenda Trust raises most of its funds by selling items that have been donated.  We support an orphage in Zambia.  On this blog we hope to tell you about some of the things we have been given, what happens when we sell them, the events we put on and how the money is spent.


Greenbelt 2011 was really brilliant.  We had our best ever fundraising year there, selling vintage clothing, records and books.  One of the best comments of the weekend was somebody saying the stall was just like Greenbelt used to be in the good old days- no doubt because our prices were reasonable, some stuff even being free, and we had also brought stuff along like saucepans, mugs and blankets that people might have forgotten to bring.  I thought we would be short staffed when my husband and trusty assistant went sick the night before, but friends from High Beach Church came to the rescue and everything went smoothly. 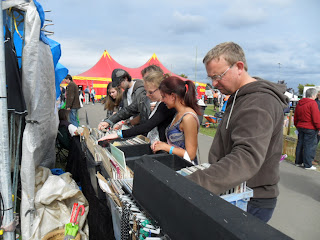 Our vinyl department at Greenbelt was always popular


Once back we got a call about some furniture.  This included a wardrobe and chest of drawers - somebody had just asked us for a wardrobe and they ended up having both, so that worked out well.

Put a couple of dismantled tall bookshelves on Gumtree as freebies, as they didn't look like they had any resale value.  We do this rather than throw things away.  A bloke turned up for them on a bicycle - I presume he made it home ok as I didn't hear anything on the news about a nasty accident on the Mile End Road.

Got another call to clear out a disused bowls club.  It's amazing how quickly a bowling green can turn into a meadow.  Got a lot of bar furniture, a large quantity of disco records and a jar of pickled onions which had apparently been appearing as a raffle prize for years and had become a standing joke.  They were a few years out of date but we tried them with our fish and chips anyway - not the best I've had, it has to be said.

Sold a park bench we'd got from the bowls club to a theatre company and it appeared onstage the following night in Shoreditch.  It's not the first of our things to end up on the stage or screen.  Look out for a 70s dresser in Maggie Thatcher's kitchen in the film The Iron Lady - that's one of ours.

Then followed another example of inappropriate transport - a bloke turned up in a Porsche to buy a table.  Luckily it was a soft top and he was slim.

Sent off £4000 to Zambia for orphanage expenses.  This should see them through to the end of October as long as there are no emergencies.

Gave a box of odd crockery, buttons and some mirrors to the brain injury charity Headway for them to use to make mosaic models.  Really pleased that we can put our unwanted stuff to good use.
Posted by Tatenda Trust at 13:04 No comments:

Tatenda Trust
We are a small UK registered charity supporting a project in Lusaka, Zambia that provides education and personal needs for orphans and vulnerable children. We were established in 2001 and both we and the project we support have a Christian ethos. We are staffed by volunteers and are thus able to donate practically all of the money we raise directly to where it is needed in Zambia. We are keen on recycling and try to ensure that practically nothing we are given is thrown away.